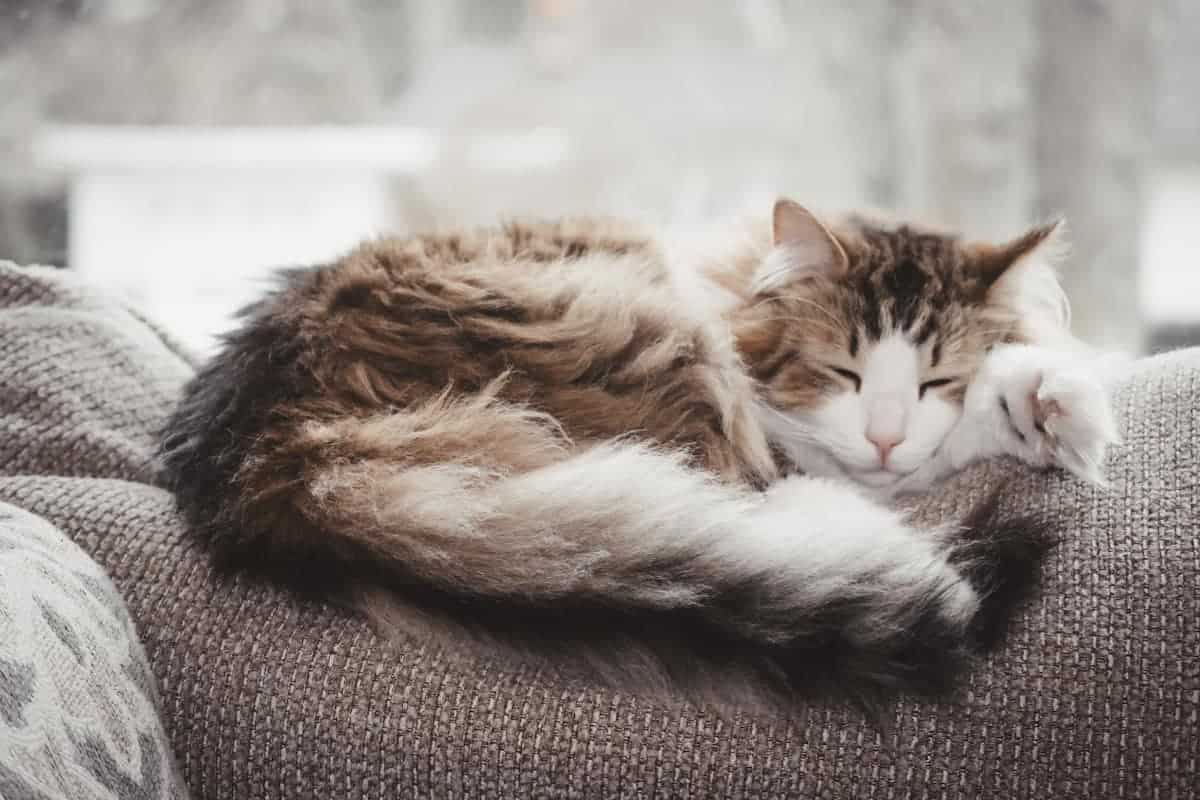 Do you often find your cat sleeping in strange positions? It may seem as if they are just taking a nap, but sometimes cats will actually pretend/fake sleep. There are several reasons why cats might do this, and we will discuss them in this article. If you are a cat owner, it’s important to be aware of these reasons so that you can better understand your furry friend!

Yes, Cats do fake sleep it’s a part of a cat’s natural defense mechanism helping them to stay alert for potential predators. When cats want to fake sleep they will get into their chosen position close their eyes and give the appearance as if they were sleeping. To predators, it looks like they are asleep when in actual fact they are pretending.

Fake sleep is a part of a cat’s natural defense mechanism, helping them to stay alert for potential predators. Cats faking sleep helps in stressful situations, such as when visitors come over, during loud storms, or when surrounded by unfamiliar animals and people.

Pretending to sleep is sometimes confused for a catnap but is a common behavior among cats that has long intrigued researchers and animal experts. While catnaps are often a way for cats to relax and catch some extra Zs throughout the day, fake sleep is a way for cats to deliberately trick others (including you) into thinking that they are asleep, despite being completely alert.

This puzzling behavior occurs when a cat appears to be asleep, but can be quickly stimulated into alertness. While there is still much to learn about exactly why some cats engage in fake sleep, there are several theories that offer possible explanations.

Some experts believe that it is most likely a way for cats under stress to ward off outside disturbances while also helping themselves relax. Others posit that feline fake sleep may serve as a way for cats to see what you will do while they’re asleep — to see if you notice them or if you miss them.

Whatever the reason may be, fake sleep is one of the many interesting behaviors exhibited by our feline companions, and continues to pique the curiosity of cat lovers everywhere.

This may not apply to your feline friend if your home isn’t a stressful place to be in. Oftentimes cats in animal shelters undergo large amounts of stress, and cats have few mechanisms to help them cope. That’s where fake sleep sometimes comes into play.

Fake sleep is thought to be part of a cat’s natural defense mechanism, helping them to stay alert for potential threats and predators. It comes in handy in stressful situations, such as when visitors come over, during loud storms, or as you know, when living in an animal shelter surrounded by unfamiliar animals and people.

They Want to Watch You

When you see your cat curled up on the couch, it probably looks as if they are fast asleep. But what you might not realize is that sometimes, even in the most relaxed environments, cats still engage in pretending to sleep.

In many cases, they want to keep a close eye on their humans while going unnoticed. The truth is that your cat probably loves you so much that it wants to follow your every move. Whether we’re cooking up a storm in the kitchen, surfing the web at the computer, or wrangling the kids on the living room floor, our furry feline friends are there with us every step of the way, even when it looks as if they’re sleeping!

They Are Trying to Steal Your Food

That’s right; cats will often pretend to be asleep in order to get their paws on your food as soon as you’re not looking. You may be working hard at your homework or catching up on projects at the dinner table while your cat peacefully sleeps (or so you think) curled up next to you. But don’t be fooled. As soon as you turn your back, they’ll be stealing your snacks. So the next time you see your cat snoozing near your dinner plate, think twice before turning your back or you might just lose your meal.

They Are Testing to See If You Still Love Them

Sometimes cats will pretend to sleep in order to test their human’s affection. By pretending to be asleep, they can see if their human notices them and still wants to show them love. Perhaps you haven’t had time to show your cat affection lately.

This might be a way for cats to see if they are still your number one. Cats are very perceptive creatures, and they will quickly pick up on any changes in their owners’ behavior. If you notice your cat suddenly feigning sleep, it may be because they want to make sure that you still love them just as much as ever. So if you see your cat faking sleep, make sure to give them some attention before going about your own business!

How can you tell if your cat is really asleep, or just faking it? It’s a little tricky to distinguish, but here are a few simple tips.

Take a look at their position. If they’re stretched out and appear relaxed, they’re probably asleep. But if they’re curled up in a ball, they might just be pretending.

Watch their breathing. Real sleep is usually accompanied by deep, even breathing. If your cat’s breathing is shallow and erratic, they’re probably not really asleep. They might be sniffing their surroundings wide awake, so be on the lookout.

Finally, watch their ears. Try making a noise. A sleeping cat will usually remain undisturbed by subtle environmental noises. If you see your cat’s ears moving as if they are listening to something, they’re likely feigning sleep. So the next time you see your cat snoozing away, take a closer look. They might just be faking it!

What to Do If Your Cat Is Fake Sleeping

If your cat is fake sleeping, there’s no need to worry. It’s a perfectly normal behavior for cats. However, if you’re concerned about your cat’s health or well-being, make sure to take them to the vet for a checkup.

Fake sleep is thought to be a part of a cat’s natural defense mechanism, helping them to stay alert for potential predators. It comes in handy in stressfull situations, such as when visitors come over, during loud storms, or when surrounded by familiar animals and people

Fake sleep can also be a sign of stress or anxiety, so it’s important to make sure that your cat is healthy and happy. Other than that, just enjoy the spectacle of your furry friend sleeping, even if they’re just faking it!

Cats fake sleep for a variety of reasons. Whether they’re trying to steal your food, test your affection, or just cope with stress, it’s important to remember that fake sleep is perfectly normal behavior for cats. 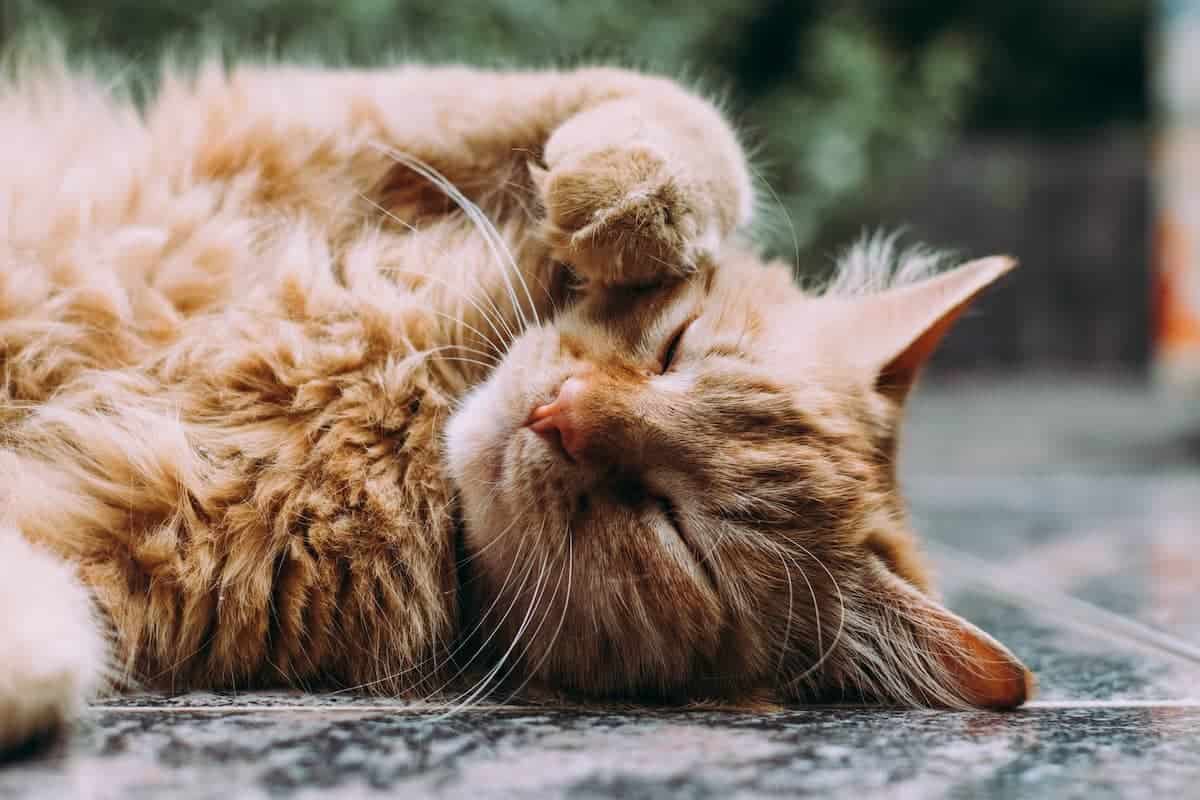 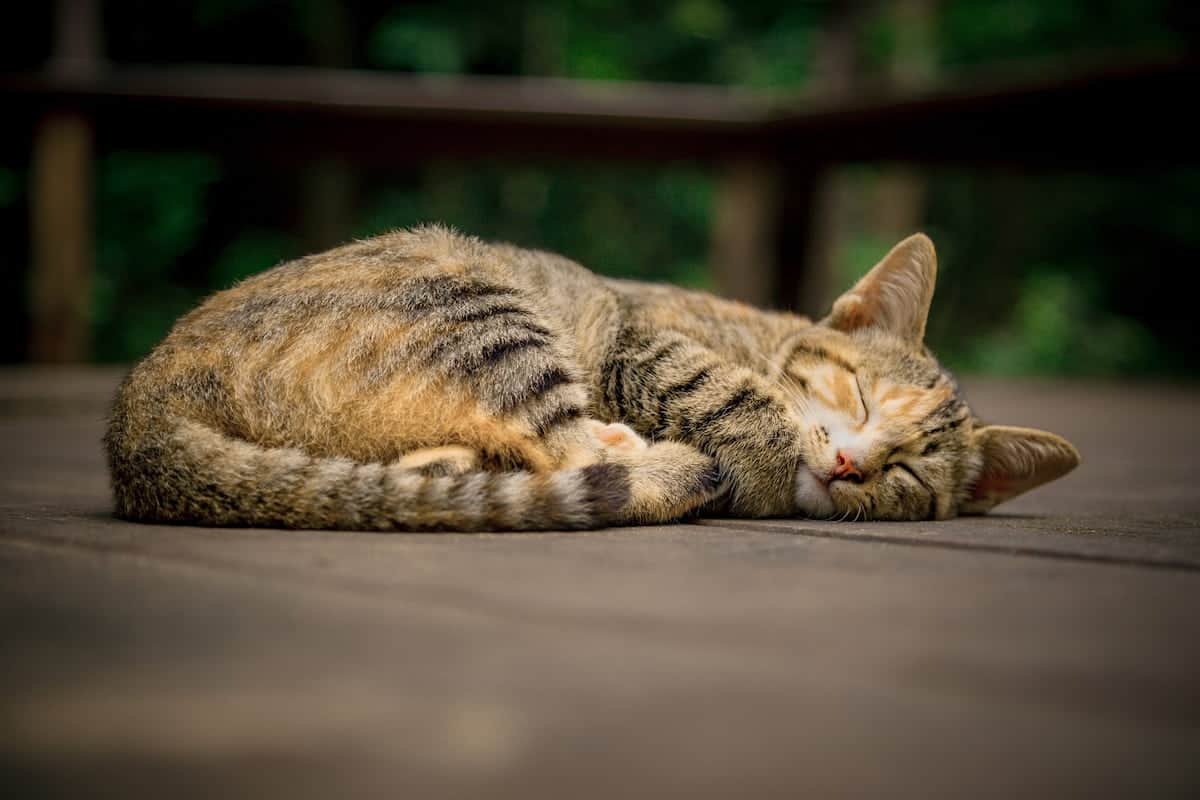 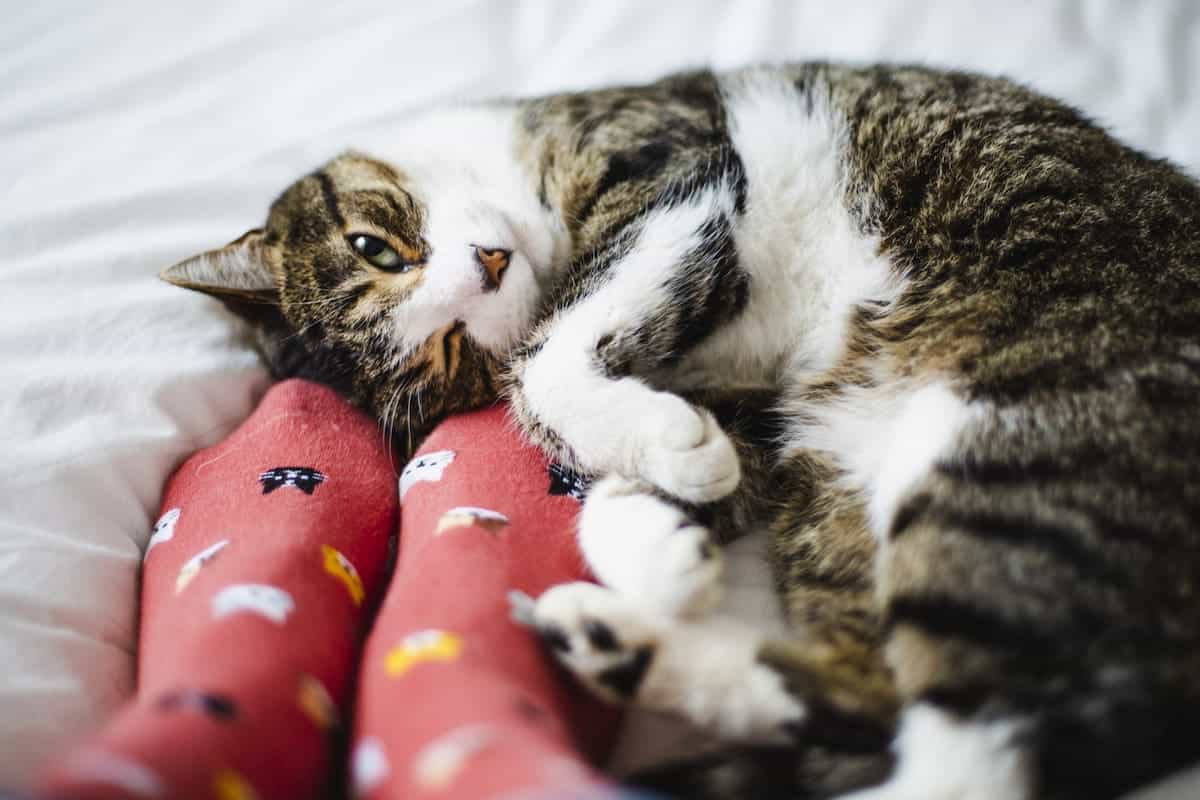 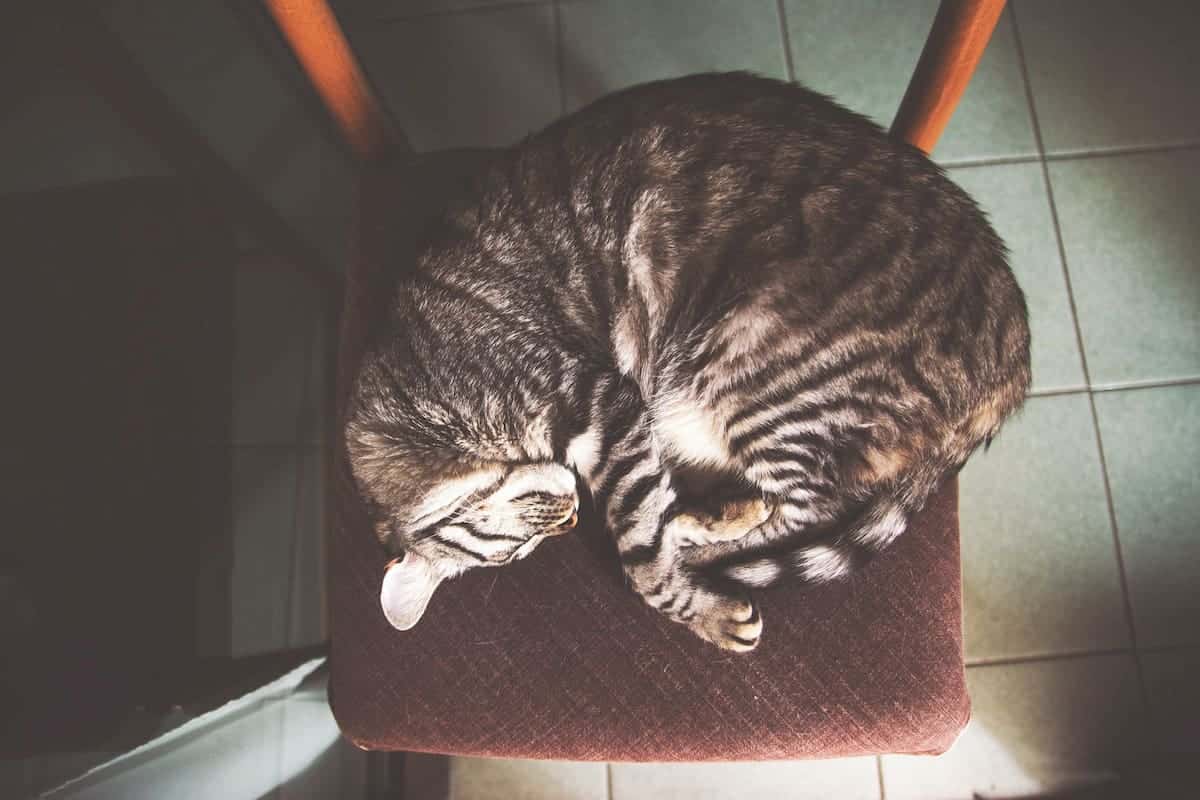 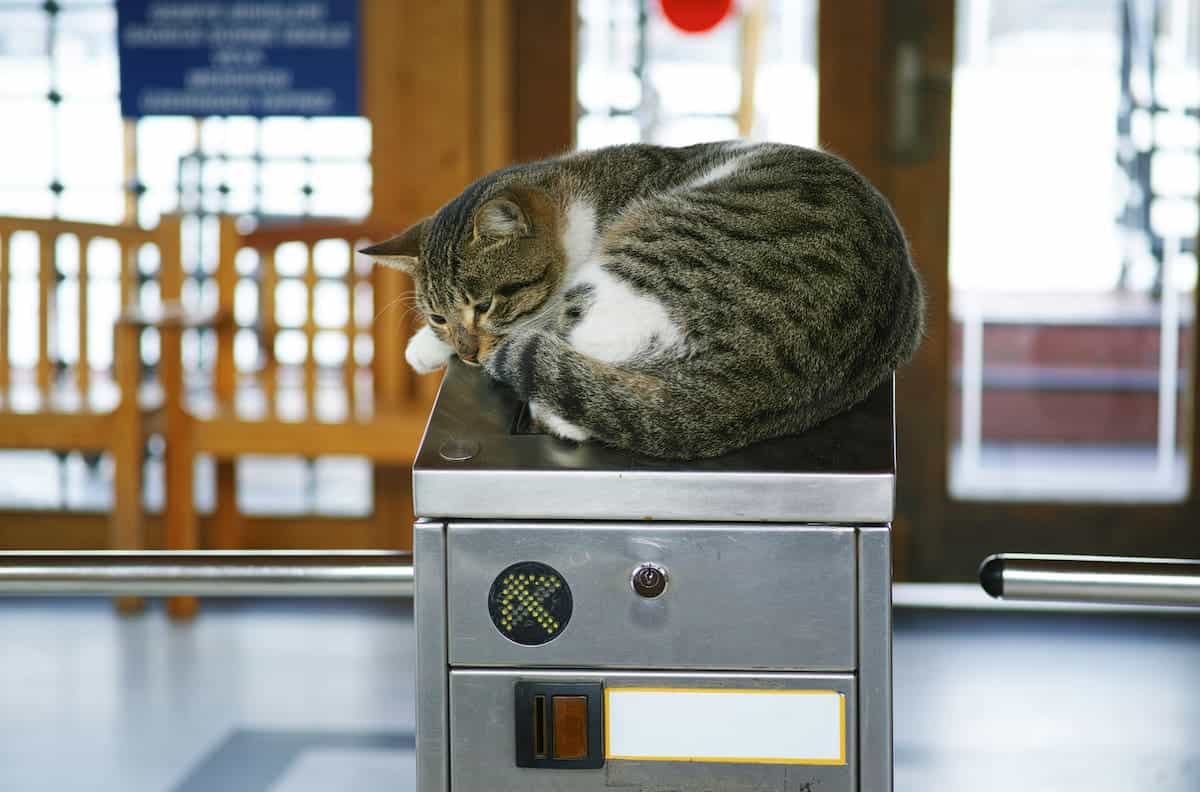 Why Do Cats Sleep on Your Head?

Have you ever woken in the middle of the night to find your cat sleeping on your head? If you’ve ...