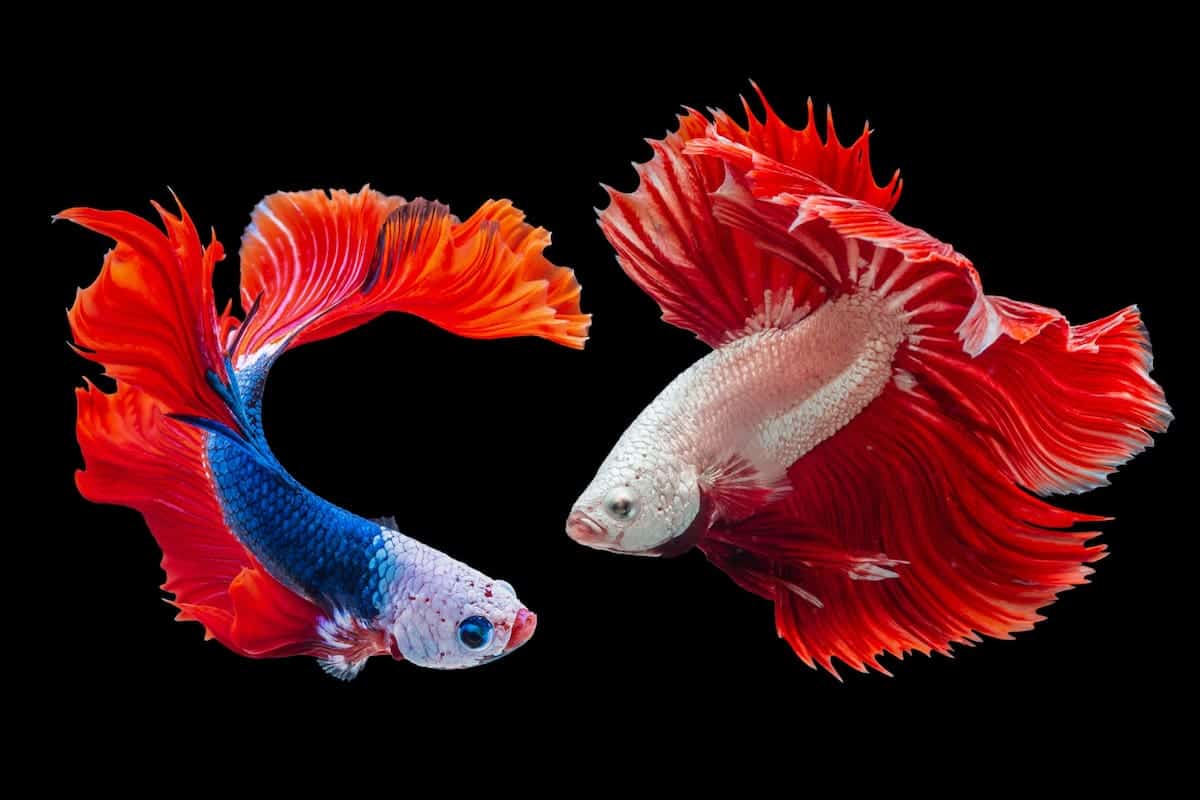 If you have pet cats or dogs, you’ve probably seen them sleeping (some days, you may see them asleep more often than you see them awake). But if you have a betta fish, you may be wondering if it sleeps at all!

All animals need sleep, even betta fish. However, they cannot curl up on a soft, dry bed and close their eyes like mammals do. Betta fish sleep at night just like humans, but they have some pretty strange sleeping habits.

Betta fish usually sleep in secluded spots in their tank, so they may be hard to spot while sleeping. Here is what you need to know about their sleeping habits so you don’t accidentally scare yourself or your fish when you think it’s playing dead.

How Does a Betta Fish Get Comfortable for Sleeping?

Betta fish don’t have comfy pet beds or even spots for bedding down like mammals do. However, they are perfectly capable of sleeping in the water.

When getting ready for sleep, a betta fish will usually find a secluded spot within its tank and tuck itself away there. Even though most betta fish these days are bred in captivity, their instincts still revolve around hiding from predators. They like to find spots that provide enough cover from potential threats, and they still stay alert enough to sense movement in the water.

Bettas often use their tank decorations as sleeping spots. You may find your betta nestled among the aquarium plants or tucked under the rocks. Other bettas have more unusual sleeping spots, such as wedged beneath the filter and the tank wall.

What Positions Do Betta Fish Sleep in?

Some betta fish just lie down on the bottom of the tank and fall asleep. Others have more unusual sleeping positions.

Some fish like to sleep curled up on their side like little scaly cats. Other fish are even stranger and will sleep vertically with their head pointed toward the bottom of the tank. Some bettas even sleep with their fins splayed open, because they like to show off even while asleep!

Every fish is different, so there is no one way that a betta fish sleeps. If you observe your betta in a strange position and it isn’t moving for several minutes, then it is probably asleep, even if you think that it is uncomfortable.

Help, My Betta Fish Is Above the Water!

Some betta fish like to sleep on leaves that float just above the surface of their tank, which terrifies their owners. However, betta fish have evolved so that they can breathe air for short periods of time. While your betta should never be out of the water completely, it can sleep near the surface if it wants to without putting itself in danger. These fish sure have some weird sleeping habits!

How to Tell If a Betta Fish Is Asleep

A betta fish’s unusual sleeping positions often terrify its owners. Before planning your fish’s funeral when you catch it wedged in a strange part of its tank, check for signs that it is just asleep.

When betta fish sleep, their breathing slows down. However, their gills and sides are still in motion, even though they are moving slower than usual.

Your betta fish may also change color. Their scales and fins sometimes get paler while they sleep. Scientists think that this is an evolutionary defense mechanism to avoid attracting the attention of predators while a fish is sleeping. Don’t worry, your fish will return back to normal when it wakes up.

Do Betta Fish Sleep with Their Eyes Closed?

How Can You Wake up a Betta?

If you’re not sure if your betta fish is dead or just asleep, don’t panic and wake it up. Tapping on the glass, making loud noises, or poking the fish will startle it and could cause it to panic or even get sick. Remember that you are many times larger than your betta and what seems like a friendly tap to you is something terrifying to your fish.

Even though you’re nervous, the best thing to do is to just wait for your fish to wake up. Most betta fish wake up when someone turns their tank light on or when its body remembers that it’s feeding time. If your betta does not wake up for its meal, then it probably passed away.

Helping Your Betta Get a Good Night’s Rest

Betta fish can be quite picky when it comes to their sleeping environment, so understanding how these fish sleep can help you maintain a healthy environment for your betta. Betta fish only sleep at night, so they need regular periods of light and darkness to maintain their circadian rhythm. Make sure that you turn the tank light off around the same time each night and turn it on during the day.

Your betta fish should also have a large tank with plenty of enrichment objects for hiding, including toys, structures, plants, and gravel. Betta fish need secluded areas where they can safely sleep. They also need enough enrichment to play during the day. If you notice your betta snoozing a lot during the day, it might be bored.

Finally, many betta fish are territorial. If you introduce a friend to your betta, it might stop sleeping because it doesn’t feel safe sharing a tank with another fish.

Like all animals, betta fish sleep. However, their sleeping habits are unusual so you may not realize what they are doing. Betta fish sleep with their eyes open in secluded spots in their tank. As long as your betta has a place to hide and enough darkness at night, it will snooze happily.